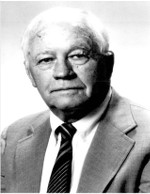 University of Arizona Law,
class of 1946

Thomas Chandler was born in Knowles, Oklahoma, in 1920. Both his mother and father were school teachers. The family moved often from town to town, primarily in Oklahoma and Arkansas, and by the time Chandler was in high school he had lived in fourteen or fifteen places. At age fifteen he came to Parker, Arizona, where he graduated from high school in 1938.

Chandler worked at various times on the construction of the Parker Dam until he graduated from the University of Arizona in 1942 with a B.A.

Since Chandler was unable to join the armed forces during World War II, he worked on the construction of Marana Air Force Base in 1943, until he decided to return to attend law school. He graduated from the University of Arizona Law School and was admitted to the Bar in 1948.

Chandler’s first job as a lawyer was for Evo DeConcini’s law firm. He was next hired by the firm of Darnell, Robertson and Holesapple. In 1952 he established his own firm in partnership with Charles Dennis McCarty. The firm of McCarty and Chandler has grown over the years to the firm of Chandler, Tullar, Udall, and Redhair of today.

Interviewed by James McNulty in 1986.