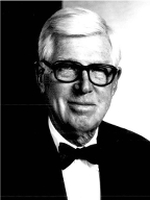 Philip E. Von Ammon was born in Winnetka, Illinois, in 1915. He attended Northwestern University for both undergraduate school and law school, receiving his law degree in 1938. Upon graduation Von Ammon joined the Chicago law firm of Sidley, McPherson, Austin and Burgess. In 1942, he joined the navy, leaving the service with the rank of Lieutenant Commander. In 1946, Philip worked for the next five years as a trial lawyer for the Santa Fe Railroad in Chicago.

In 1951, Walter E . Craig asked Philip Von Ammon to join the firm of Fennemore Craig in Phoenix where he served as Managing Partner for many years. Over his exemplary career he was active in the promotion of the profession and legal community. .

Interviewed by James McNulty in 1988.