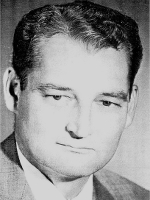 University of Arizona Law,
class of 1933

State Bar of Arizona
member since 1933

(b. 1912-d. 1992) Frederick C. Struckmeyer was born in 1912. Upon his appointment to the Arizona Supreme Court in 1955, it was noted that he was the youngest person ever elected or appointed to the Supreme Court. He was 43 years old at the time. He served as Chief Justice in 1966 and for a total of 27 years with the Supreme Court.

In 1953, then Maricopa County Superior Court Judge Struckmeyer, decided the case Phillips vs. Phoenix Union High Schools and Junior College District. He wrote, "a half century of intolerance is enough," ruling that the Arizona law permitting school boards to segregate pupils was unconstitutional and the Phoenix Union district's segregation of African-American students was illegal.