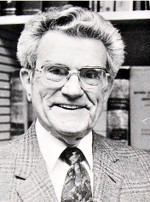 University of Michigan Law,
class of 1931

State Bar of Arizona
member since 1931

Thomas Leavitt Hall was born in 1907 in Kansas City, Missouri. When Thomas was 12 his family moved to Nogales. Hall attended Nogales High School, graduating in 1925, and then the University of Arizona, graduating in 1929, having studied literature and Spanish. He then began law school at the University of Michigan. When he finished law school in 1931, he returned to Nogales and entered the law practice of his step-father, Duane Bird. He was admitted to the State Bar of Arizona in 1932.

At the start of World War II,  Hall went into the army. He served in the Judge Advocate General's Department, leaving the service with the rank of Colonel. Hall then became the Administrative Assistant to Senator Ernest W. Mcfarland. After two years, he returned to Nogales and private practice with Duane Bird, where he worked primarily as a trial lawyer.

In 1957 Hall joined the faculty of the University of Arizona College of Law where he taught and was, for a time, the lawyer of the Board of Regents. Hall retired from the U of A College of Law in 1979.

Interviewed by James McNulty in 1987.