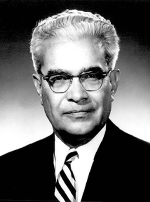 University of Arizona Law,
class of 1936

State Bar of Arizona
member since 1936

Joseph C. Padilla, born in 1902 in Morenci, Arizona, belongs to a fast-disappearing breed of law practitioners : those who came into the profession by way of individual study, rather than through formal law school education. He completed his school education in Clifton, in 1921, and worked in various capacities for Phelps Dodge, including mine cost accountant, and assistant metallurgist until 1932. During this time, he studied correspondence courses in law, accounting and mining engineering. In 1925, he married Sophia Doak, and they eventually had three children.

In 1932, when Phelps Dodge suspended operations, the Padilla family moved to Tucson, where he worked for the Alianza Hispano-Americana as an accountant. He studied for the bar examination, passing it on the third try, and was admitted to the State Bar of Arizona in 1936. Padilla served as a Spanish court interpreter, law librarian, and practiced law until World War II, when he was appointed to the Government Accounting Office, and served as a Chief Investigator and Auditor in Puerto Rico and California. After the war, he returned to Tucson, where he practiced law and worked for Tucson Title Company.

Interviewed by Robert F. Palmquist in 1987.