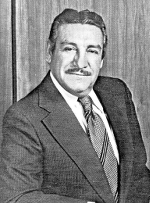 Raul Hector Castro was born the twelfth of fourteen children on June 12, 1916, in Cananea, Sonora, Mexico. In 1926 the Castro family crossed the border into the United States and moved to Pirtleville, Arizona to escape political persecution. After graduating from Douglas High School in 1935, Raul Castro enrolled in the Arizona State College in Flagstaff, Arizona, where he received his B.A. in 1939, the same year he became a naturalized citizen.

After spending a few years traversing the country as a professional boxer, Mr. Castro went to work for the United States Department in Agua Prieta, Mexico, beginning in 1941. After five years, Castro enrolled at the University of Arizona College of Law in 1946. By 1949 Mr. Castro had received his LL.B., passed the bar examination and opened a law office in Tucson with David K. Wolfe.

In 1951, he was appointed to the Pima County Attorney’s Office and served under Robert Morrison and Morris Udall, becoming county attorney himself after running for the office in 1954. Mr. Castro was elected Pima County Superior Court Judge in 1958 and served until he was appointed, in 1964, by President Lyndon B. Johnson to be ambassador to El Salvador. He returned to Arizona and ran for governor in 1970.

In 1974, Mr. Castro defeated Russ Williams by five thousand votes and became the first Hispanic governor of Arizona. Three-quarters of the way through his term, he was aced by President James E. Carter to serve as ambassador to Argentina and held that post from 1977 through 1980. He has since returned to private practice in Phoenix in the law firm Castro, Zipf and Marable.

Interviewed by Earnest Calderon in 1991.