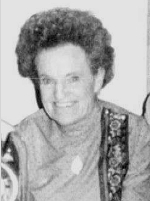 Elizabeth Kraker Daume was born in 1908, in Austria, while her mother was visiting relatives. The family moved to Bisbee in 1909, where her father worked for Phelps Dodge. Daume graduated from Bisbee High School in 1926 and worked as a bookkeeper for Phelps Dodge Mercantile. Then started working as the bookkeeper for the Southern Arizona Auto Company.

In 1937, Daume was hired by Fred Sutter and Jim Gentry to be the secretary for their law office. She managed the office, kept their personal financial records, handled much of the probate work, worked with the various lawyers who joined the firm, and hired and fired other secretaries over the years. In 1985, she retired after 47-1/2 years with the firm.

Interviewed by Adelaide Elm in 1987.