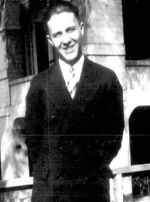 University of Arizona Law,
class of 1929

Alton C. Netherlin was born in Roswell, New Mexico in 1904. His family moved to Ajo, Arizona in 1923. He studied law at the University of Arizona, graduating in 1929. He set up his practice in Ajo during the 1930's, and also had a law office in Phoenix. For several years, during the 1940's he was active in the cattle business, grazing and butchering.

After World War II, he resumed an active law practice and was appointed Deputy County Attorney for Pima. He married Maria Netherlin in 1966, and adopted six children in the ensuing years.

Interviewed by Robert F. Palmquist in 1987