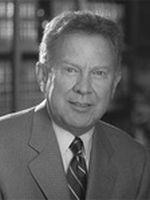 University of Arizona Law,
class of 1972

State Bar of Arizona
member since 1972

Bernard Van O'Steen, Jr. was born in 1945 in Sweetwater, Tennessee. His father was a career military person and was sent to Arizona in 1959 to serve as an advisor to the Arizona National Guard. Bernard attended California Western University for his undergraduate degree. He spent a year in active duty with the Navy and then began studying the law at Arizona State University graduating in 1972.  The first two years of his legal career, O'Steen worked for Maricopa County Legal Aid. Mr. O'Steen is a founding partner of O'Steen & Harrison, PLC.

Interviewed by Kurt Goering in 1992.