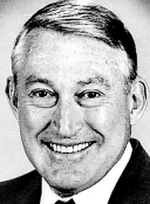 University of Arizona Law,
class of 1951

State Bar of Arizona
member since 1951

James F. McNulty, Jr., born October 18, 1925, grew up in West Roxbury, Massachusetts. Following graduation from Boston Latin School in 1944, he served in the military for eighteen months at Fort McClellan. In 1946 he moved to Tucson and enrolled at the University of Arizona in the College of Business. In 1950 he married Jackie Boevers and in 1951 he graduated with an LLB degree from the College of Law.

After graduation, McNulty was hired by one of the oldest law firms in the state, Gentry and Gentry in Bisbee. While practicing law, he served six years in the Arizona Senate (1968-1974), where he was selected as the most respected member in 1970, and three years on the Arizona Board of Regents (1980-1980). In 1982, he was elected to the U.S. House of Representatives, where he served on the Interior and Public Works committees.

Estes DuMont (Bud) McBryde was born December 9, 1919, in Dallas, Texas. His family moved to Tucson in 1933. While a student at Tucson High School, McBryde played baseball and basketball, and was captain of the baseball team. McBryde enrolled at the University of Arizona with a baseball scholarship and received a Bachelor of Science degree in Business in 1942. Upon graduation he received a commission in the Marine Corps and spent the next three years in the South Pacific. In 1945, after his service with the Marine Corps, McBryde played minor league baseball in the Southern Association. In 1946 McBryde enrolled in the University of Arizona Law School and received his J.D. degree in 1949.

Upon graduating, McBryde opened a law office in Casa Grande, where he could both practice law and play baseball for the Casa Grande Cotton Kings. In 1952 McBryde was appointed Deputy County Attorney and in 1960 he became Pinal County Attorney. He was appointed Pinal County Superior Court Judge in 1966. He served as presiding judge from 1978 until 1989.

University of Arizona Law, class of 1950

State Bar of Arizona member since 1950

Alfredo Marquez was born in 1922 in Winkelman, Arizona. After high school he attended Curtis Wright Tech located at Glendale, CA airport. He completed the engineering course before enlisting in Navy Air Corps and became a pilot in the Navy.  Alfredo earned his degree in economics in 1948 from the University of Arizona and his law degree in 1950 by completing the accelerated program for GIs.  After earning his law degree Marquez joined the Attorney General’s office for a short while before moving back to Tucson to work with Morris Udall in the County Attorney’s office.  He then worked in Washington DC with Stewart Udall for one session before coming back to Tucson to serve as the  City Prosecutor.  In 1957, along with Lowell Rothschild and John Mesch, Alfredo formed a partnership where he worked until he came to the bench in 1980. In 1980, President Jimmy Carter nominated  and the Senate approved Alfredo Marquez for appointment to the bench in the United States District for the District of Arizona.

State Bar of Arizona
member since 1939

Ashby Ira Lohse was born May 21, 1914, in Tucson, Arizona. His father, Leslie Albert Lohse, was a wholesale grocer and a close friend of Albert Steinfeld. Among other friends of the family were several lawyers who strongly influenced Ashby Lohse's choice of the law as a career.

Lohse attended Tucson public schools, Holladay and Roskruge, and graduated from Tucson High School in 1932. He then entered the University of Arizona and received his B.A. in economics in 1936, and his J.D. in 1939. Upon graduating from law school, he took the bar exam and began a private practice. In 1941 Lohse received a commission in the army , where he served until 1946, resigning as a Colonel. Upon his return to Tucson he went to work for Tucson Title for nine months and then returned to private practice. In later years his practice consisted primarily of work with foundations.

Lohse has had a lifelong interest in water and water law and was appointed to the Interstate Stream Commission by Governor Paul Fannin. 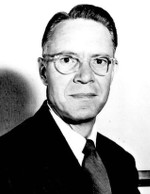 University of Arizona Law,
class of 1928

State Bar of Arizona
member since 1928

Norman Sterling Hull was born in Seattle, Washington, in 1904. Since both of his parents had died while he was young, he lived with his grandparents. After his grandfather died, in 1925, Hull moved to Tucson, Arizona, with his grandmother. He then enrolled in the University of Arizona law school, graduating with highest distinction in the university class of 1928.

In 1931, Hull joined the Phoenix office of Ellinwood and Ross, where he stayed for the next twenty-three years. During this time the firm's principal client was Phelps Dodge. The firm also represented insurance companies and other large corporations, such as Standard Oil. During this time, Hull served as president of the Phoenix Chamber of Commerce, as well as Big Chief of the Phoenix Thunderbirds.